It works! I updated the Flickr gallery with some shots of it working.

The right arrow’s wire is a bit loose, when I first screwed everything in to the enclosure, it wasn’t working, but taking it back out and putting it back in fixed it. I hope it doesn’t spontaneously stop working after time. 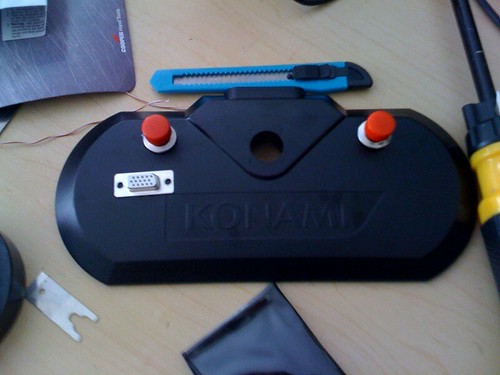 So my progress so far:

– “Liberated” the control box from the remainder of the soft pad, rendering the soft part useless.
– Used a recently purchased Dremel to drill into the top of the control box, making room for the output port, select button and start button.
– Hot glued the port and buttons into place (although one of the buttons doesn’t really want to stay, I made the hole a bit too big.
– Soldered most of the wires I need to the control board. The guide I was going by was for a third party Mad Catz DDR pad, which had nice, easy to connect to solder points with posts and all. The actual Konami version is harder, as there are very tiny holes and no posts, so I had to strip down the wires down to half of their threads, slip them through the holes and solder them to the flat part of the board.
– Verified the connections of the wires to various parts on the control board with continuity tester.

Next up is soldering up the last two wires (select and start) to be used for the switches, then soldering the other half of all the wires to the port and switches. I’m still a bit unsure about the stability of the wires, they are awfully fragile now that only half of them are used. I’m going to use electrical tape to tape them to the board after they all are soldered in, hopefully that will keep them from shifting too much and snapping off.

So I don’t remember if I posted or not about it, but I bought the updated control box for my Cobalt Flux hard DDR pad and was disappointed to find that the XBox connectivity was only for the original XBox, not the XBox 360. I did some research online, and it turns out that many people are disappointed about this, and that a solution exists, it just involves a bit of breaking apart a cheaper dance mat and solder and perhaps a resistor or two. I just ordered a bundle that has an XBox 360 mat in it, and it’ll be a sacrifice for the greater good.

Now I need to find my soldering iron…

$99 just to show up. (which I knew, and was up from $75 since the last time this happened, which was for the microwave and I ended up only paying the $75 and opted not to pay for the labor which would have cost more than a new microwave).
$125 for labor.
$18 for the new tube.

At least this time it was mostly worth it, as refrigerators are a bit more expensive to replace than microwaves. And yay, 50% of it is tax deductible so that’s like 20% off right there.

I saw a man in the grocery store talking to himself. I figured in this day and age, he was probably just talking on a BlueTooth headset. So I looked on one ear, then the other.

Nope, he really was talking to himself.

I have finally cleaned up the CSS of my journal/friends page to 1) not waste so much space and not use tables anymore and 2) look decent on the iPhone.

I hope it’s not horribly broken in some way.

I am disappointed to find that, in addition to Mac OS 10.5.3, I need an Intel based Mac to program for the iPhone.

So I probably should have posted this yesterday, but I’m lazy. I finally braved the line a bought an iPhone. The line was all of one person long, too.

Then I used Bluetooth to sync it to my Prius and they both exploded in a cloud of pretentiousness.

Hmm it looks like Safari is freaking out on the tags box on the post form. So I’ll just have to leave it on something.

I hate it when I get a whole post thought out in my head, but then forget to actually post it.

This weekend was the first for a while that I didn’t have to go into to work at some point, which was good. Last weekend, I had something weird happen. So I’m in the office on Saturday, spinning my wheels trying to figure out this code so I can fix a bug in it which may or may not have been in the code itself or with Struts/OGNL being the bastard that it usually is and just silently refusing to accept data passed to it for some arcane reason. The code is like quite a bit on this project, where it started out simple and elegant, but had so many other things tacked on to it that it becomes almost impossible to trace through how its supposed to work. (The fact that JavaScript is mostly event-based makes it even harder to figure out.)

I’ve been at it for four or five hours, iterating each time takes about 15-20 minutes as usual (compile, install, restart, navigate to page) so I’m already a bit frustrated, having only sort of nailed down one part of the error (an event wasn’t being fired when it should have been), and all of a sudden my monitor goes blank. Then my computer starts beeping. Four short beeps. I tried turning it off and on, and it beeps again.

The motherboard had died.